Insight – Stories of the South West 2013

Each participant chose a story from their district to interpret as both an ephemeral installation on site and then a studio work for the exhibition ‘Insight’ at the Bunbury Regional Art Galleries.

The Murder of Jean Bell 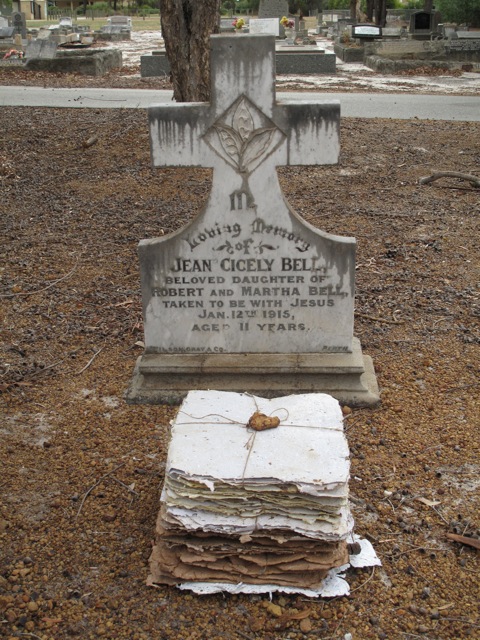 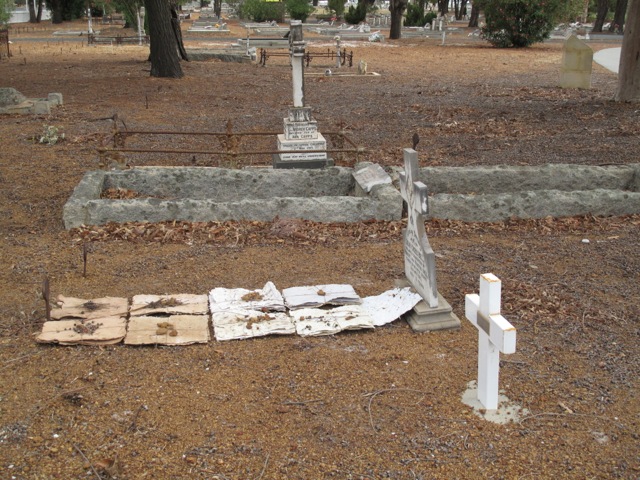 The death of young people is always tragic, none more so than this story of mistaken identity and murder. The Bell family, Mr and Mrs Bell and their two young daughters Jean and Antoinette, lived on an orchard at Maradup, between Pinjarra and Dwellingup. It was a small family enterprise but nevertheless there was one employee, a man known as Joseph Cutay, who purported to be from Malta. He worked for the family for six before, in March 1914, Mr Bell decided to let him go and there simply was not enough work to justify his employment.

Unemployment proved difficult for Mr Cutay as he travelled the state. Some time later, while in the Murchison region, he wrote to the Bell Family, telling them he had been unable to find work. He had no money and begged them not only to re-employ him, but also to pay his fare back to Pinjarra. Mr Bell agreed and by August 1914, just a few days after the declaration of the Great War, Joe Cutay was back at the farm. Mr Bell’s act of kindness was going to prove tragic for the family.

Everything continued as usual at the Bell Family Orchard until one day in January 1915 when the youngest daughter, Antoinette, reported to her mother that Joe Cutay had molested her. That night, Mrs Bell told her husband of their daughter’s distress and Mr Bell resolved to send the worker away first thing in the morning. It is thought Joe Cutay eavesdropped on this conversation, prompting his next violent actions.

It was summer and to cope with the heat the eldest daughter Jean was sleeping on the verandah. Her father had a habit of lounging on her bed of an evening to have a smoke before the family turned in for the night. It is believable, therefore that when Joseph Cutay crept onto the verandah with an axe that night, he truly thought he had murdered Robert Bell in his sleep, not poor young Jean.

Jean’s sister had been awoken by the commotion but was sent back to bed by her mother. The next morning when she went to wake her sister, in was the screams of young Antoinette that alerted the family to the tragedy that had taken place. A search began for Joe Cutay, but he was nowhere to be found. Evidence in the form of the axe and Jean’s blood stained pinafore, however, left little doubt he was the culprit.

The search went on for days until on 15 January, Joe Cutay was caught. By now it was known that he was not Joe Cutay from Malta but was in fact Andrea Joseph Sacheri, an Italian who had a previous record for assault. Apparently, on being told he had killed Jean not Robert Bell, his response was, ‘My God! What I do that for?’

Sacheri believed Robert Bell deserved his wrath. He accused him of treating him badly, overworking and underfeeding him, but he always expressed utter remorse for killing Jean. Perhaps this truly was a tragic case of mistaken identity, but it took the jury only ten minutes to find the accused guilty. Andrea Joseph Sacheri was hanged for the murder of Jean Bell.

I have always had a fascination for history and those stories which connect us to others and to ‘place’. The story of the murder of Jean Cicely Bell in 1915 at the age of 11 and the trauma and angst which must have been felt by those affected by this tragedy both her family, the police and even the man responsible for the murder; Cutay, resonated strongly with me. I was able to locate the site of this event, (though the original home is no longer there) but even better I discovered her small grave with its marble headstone in the windswept gravel of the Pinjarra Cemetery. I gained permission from her great nephew and the Shire of Murray to place my ephemeral work on her grave.

I began to imagine Jean Cicely; how she may have dressed, what clothes she would have worn or games she and her sister Antoinette may have played together on the family orchard. Her parents left the district soon after and moved to the wheat belt where later a further tragedy occurred with the death of Jean’s sister in a riding accident. The Bell family members I spoke with about this story were not made aware of it until they were adults and they presumed the reason for this was that ‘one never spoke of such events’ within their family. They said the family would have done the best they could to forget and would have simply ‘got on’ with their lives. 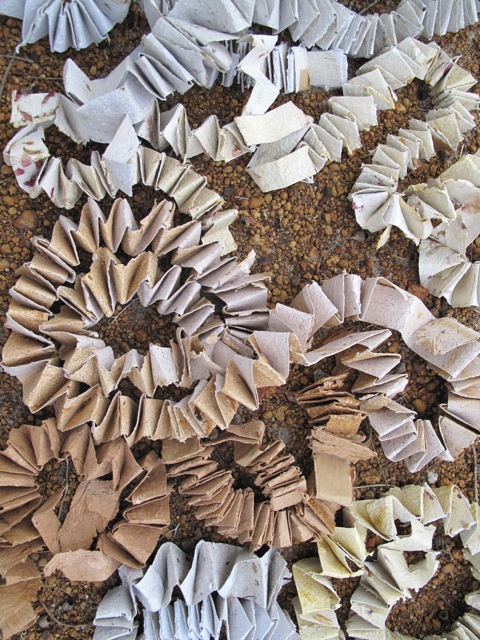 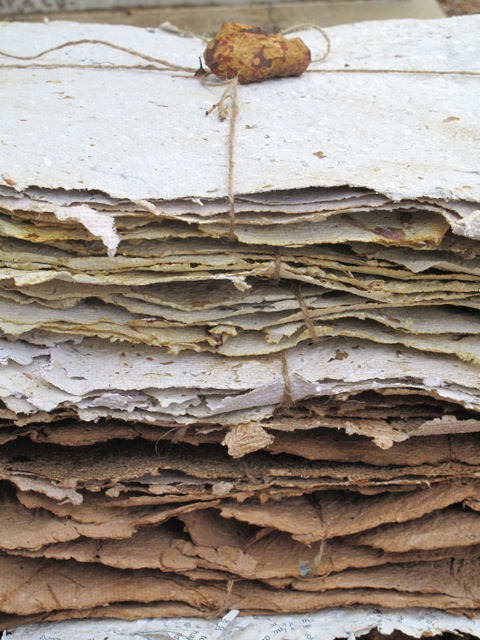 I chose to make paper using materials such as newsprint, shredded office paper from the Shire of Murray, plant materials- single Sided Bottlebrush, Marri blossoms, tea leaves, blowfly grass, Heritage Rose petals, Hydrangea petals and iron rich red clay which may have been part of Jean’s home environment in the hills at Marrinup.

Each pile of paper is wrapped loosely and tied with brown string and a small pile of gravel and dry leaves from her grave site sits ontop. There are ‘words’ no longer to be seen within the paper except for some of those pieces which form her pillow.

The paper both wraps and comforts her. 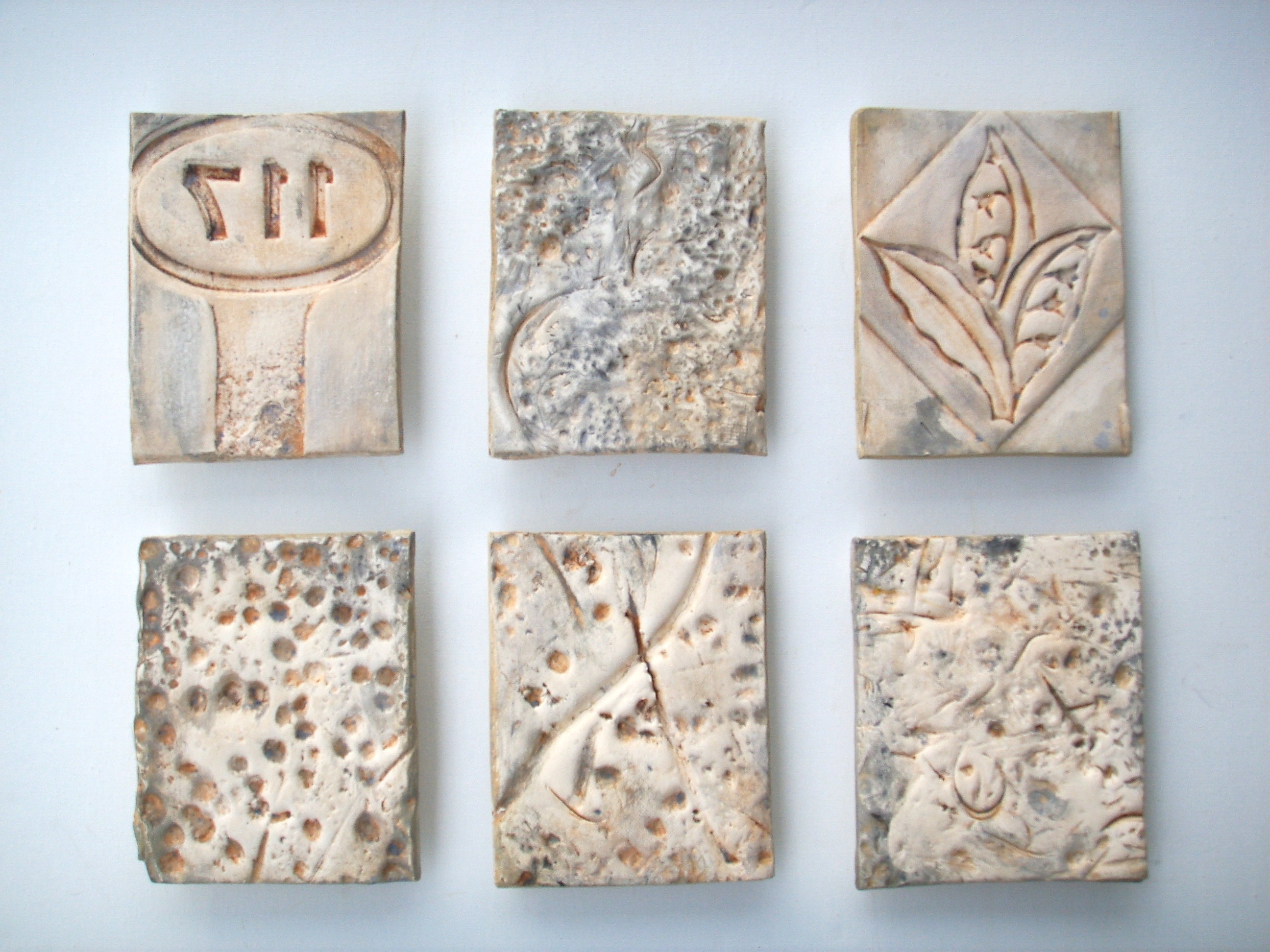 These ceramic tiles are made from bisque fired Paper clay. Each tile has been indented into the soil and leaf litter on her grave or the headstone. After firing they were painted with acrylic paint and then scrubbed back to give the appearance of stone or of the earth.